I recently came across this fabulous billboard advertising a new home development in Toronto’s east end.  I thought it was a wonderful departure from the typical billboard for new home developments showing an artist’s impression of lovely homes, mature trees and blue skies.  Nice enough, very typical but not head turning.  Or the classic billboard of a future development showing a happy couple in a big embrace with huge smiles on their face making me think that possibly this to be an advertisement for teeth whitening!  The Lilly Factory Towns sales centre billboard is a colourful and unique display of creative, outside-the-box thinking.  Sixty four colourful cups are lined up in the shape of a huge cup on a glossy black background.  Some of the lettering is also in bright pink.  Very fun and catchy; made my head turn.  The Lilly Factory Towns development has been named in tribute to the Lily-Tulip Cup Corporation factory that had stood on the property for many years.  The famous Lily paper cup was manufactured at the factory that became a well-known community landmark because of its huge two-story white cup marking the entrance into the building.  A definite head turner.  As a child whenever I saw this building I imagined it to be a place where cups of pop were handed out to anybody who knocked on the big white cup door!  Just as the huge white cup was distinctive so is the new billboard.  Which now makes me wonder, “Does each of the colourful cups hold a cold drink in them too?” 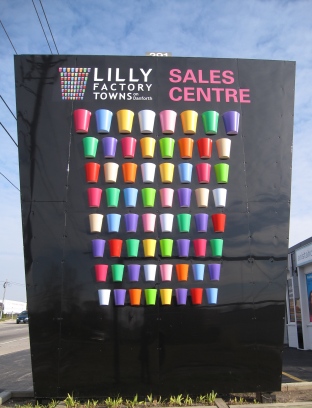