On Saturday I attended the annual ‘Designer Market’ at The Distillery Historic District in downtown Toronto.  The event is organized by Kimberly Seldon whose original idea was to make the event feel like a Paris flea market.  The Market has over 40 vendors, ranging from antique, vintage, modern and flea market finds of fabric, furniture, food, jewellery and clothing.  The location of the Market is in the Distillery Fermenting Cellar and very much sets a mood that transports you back to another time.  Walking around inside the Fermenting Cellar one can feel the ghosts from the past still lurking about and also visible are some of the old apparatus (large wooden wheels, pulley systems) that would have been used for the distilling process back then.  In 1832, William Gooderham and John Worts established Gooderham and Worts Distillery.  In 1877 the Distillery was the largest in the world.  After 153 years the Distillery ceased operation and closed.  Throughout the ‘90’s The Distillery was used for film locations making it the second largest location outside of Hollywood.  In 2003, the Distillery District was re-born and once again became a vital part of the city.  The Distillery Historic District is now a pedestrian-only village of restored Victorian Industrial buildings with original brick-lined streets and home to restaurants, shops, schools and live theatres.  I always find the Designer Market event to be a lot of fun and I really do feel that I have been roaming about Paris, if only for a morning.  This year I scored a great lamp for only $10!  Not that I needed it, but hey, when in Paris….. 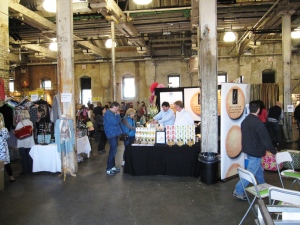 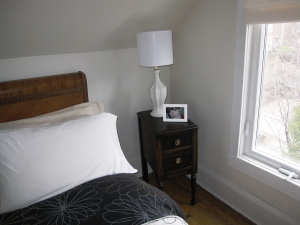