The other day while driving through a ‘leafy’ neighborhood I did an “OMG” and slammed on the brakes. Fortunately there was no car behind me!

What caused me to stop so quickly??  A score, a real good score.  Sitting at the curb was an antique spool bed!!  I figured it was still sitting there because the neighbours/the locals would never allow themselves to be caught picking up someone else’s ‘junk’.   I on the other hand had no qualms about that.

While I was lugging the headboard, footboard and rails into my car the owner of the bed came out to give me a missing piece from the headboard.  A nice elderly gentleman who after inquiring as to why he was getting rid of the bed explained, “The wife said to get rid of it, so I am getting rid of it.” – I could not have been more thrilled.

The bed is in very ‘weathered’ condition as it appears as if had done some hard time outside.  But the good thing is that there is no finish left on the bed so no messy stripping necessary.  Just a light sand.

The spool bed, named for its resemblance to sewing spools, evolved after the invention of the multiple-blade lathe in the 1800’s.  This lathe was originally designed for making buttons and spools for clothing manufacturers.  However, furniture makers soon realized that a stack of empty spools made an attractive decoration for beds.

I don’t have any plans yet for this bed and I’m not sure where I will use it but when I do I will post the result.  Stay tuned.

As I like to say “One man’s garbage, another woman’s treasure! “ 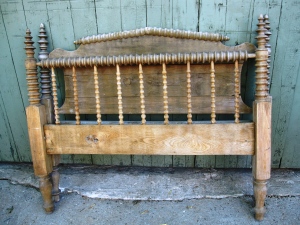