I am heading out for a gal’s weekend to beautiful Hudson, Quebec.  The picturesque town (population ~5000) located 60 km west of Montreal was once voted as one of the top places to live in Canada.  Originally settled by French Canadian farmers and “voyageurs” in the early 18th century, the region became known for its large English farming community in the early part of the 19th century. The immigrants were mainly from northern England, with others coming from Ireland, Scotland and the United States.  Nestled on the Ottawa River (Lake of Two Mountains) surrounded by farms and forests, Hudson is known for its large, turn-of-the century homes, various boutiques and antique markets, wonderful restaurants and hiking trails.  I believe a trip to the well-known Finnegan’s Market will be on the agenda to check out the ~100 vendors offering antiques, handicrafts, organic produce, home baking, local wine and lots of seasonal goodies.  Cheers! 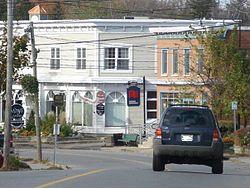