Eureka!  I have found myself a new upholsterer.  I have been recovering furniture for myself and clients for years or rather the upholsterer has.  I have found that an upholsterer is someone you create a relationship with.  They begin to understand what you are thinking.  They begin to see what your vision is for the end product.  My first upholsterer was located outside of Toronto but his workmanship and price were worth the drive.  Carl built furniture for me and he re-covered many pieces of furniture for me over the years.  Carl and I got to know each other through ‘extension’ meaning that he met many of my family, friends, neighbours and clients that he steadily did work for.  I was reminded of this fact while visiting a family member recently and was told that the sofa I was sitting on was recovered by Carl.  But like all good things that come to end Carl decided it was time to retire and move much farther from the city.  That is when I found Jack.  Jack was located in Toronto this time making it much easier for me to ‘drop by’ and ask about a certain fabric or various upholstery questions.  Once again Jack and I got to know each other.  He met my family, friends, neighbours and clients too.  Jack was the upholsterer who I had re-upholsterer ‘My Purple Chair’ with the mohair coat. (https://modmissy.com/2011/07/26/another-trash-to-treasure)  I had Jack do a lot of unusual upholstery projects for me over the years but that is the fabulous thing about re-covering furniture.  Innovation and invention!  But once again Jack retired.  Doctor’s orders.  I felt as if I was sent adrift in the ‘without upholsterer’ atmosphere once again.  But as luck would have it I recently found myself another upholsterer.  This one is a truly a gem.  David is a young gentleman from Paris that speaks English with a wonderful French accent.  Of course the first project I gave him was a challenge.  But David pulled through with shining colours.  He went the extra distance and put some unique details on the piece that I had not thought of.  So to the upholsterers of the past, the present and the upholsterers of the future I say thank you for helping me ‘material-ize’ my vision.

Is it fabric or architecture?? 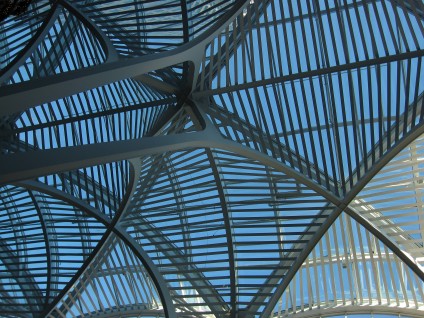