Winning the bid to be the hosting country for the Olympics is nothing short of outstanding; a gold metal accomplishment.  As Olympic athletes prepare for their competition, the competition is also on for the hosting country to present a spectacular display of their abilities.  As our world has advanced in knowledge and technology so have the Olympics with countries showcasing their leading-edge innovations in architecture, design and construction.  Rio de Janeiro will be hosting the next Summer Olympics in 2016.  Rio is not only the first South American country to be hosting the Summer Olympics but they are also planning to be the first zero-carbon footprint Olympics.  To help Rio achieve this goal, Swiss-based RAFAA Architecture and Design has designed the ‘Solar City Tower’; an eco-architectural solar waterfall.  Solar panels will capture solar energy and falling water will stimulate turbines to produce hydro energy.  The proposed structure is both beautiful and green.

Solar City Tower built atop the island of Cotonduba. 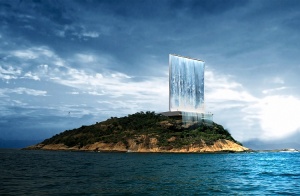 The view from the air as visitors arrive. 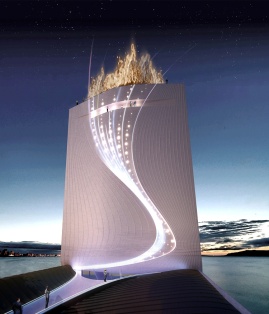 Solar City Tower will be the point of reference for the 2016 Olympic Games in Rio de Janeiro.  I am keeping my fingers crossed that all goes well and the Solar City Tower truly becomes a reality.  Definitely something to boast about!

1 thought on “Hosting and Boasting”