I had to pick up a friend recently from a medical clinic where she was having a ‘procedure’ done and was not permitted to drive afterwards.  So, I had to sit in the waiting room for a while, waiting (and waiting).  The waiting room was large enough that all of us ‘drivers’ were not sitting side by side and practically on top of each other.  The chairs were placed in a manner that enabled us to look in different directions so we were not staring at each other.  There was no window that looked outside but there was a flat screen television that allowed us to have some focal point to rest our eyes upon.  Of course there were many magazines and fortunately they were current issues.  Nothing worse than 2 year old magazines where you are reading about Christmas in June!  The chairs were clean too – that scores big points with me.  As I looked around this office/waiting room I could tell that a designer had designed this space.  The wall colour choice had been chosen by a professional not by the ‘builder’.   The chairs were coordinated with the paint and the carpet.  There was ambient light so there was a nice calm feel to the room, not glaring overhead fluorescent lighting.  And the thing that caught my attention the most was the art on the wall.  It was not some art that had been cast-offs and brought from home.  (I am sure you have been in a Doctor’s office with art like that!)  These pieces had been specifically chosen for this space.  But the thing I found most interesting was how the art had been hung on the wall.  The art was hung at the correct height (art is often hung too high) with appropriate space between the pieces (another common mistake) but I liked how someone had thought to stagger the art.  It gave me something while sitting here and waiting to reflect upon.  Interesting style.  I liked that it was ‘leftward’ of ordinary. 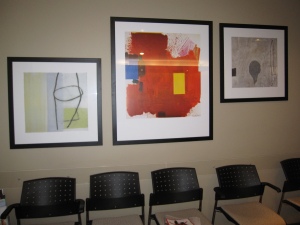