It may seem that I have a preference for contemporary architecture and that I lean towards the mid-century modern style but I do appreciate other eras.  Recently while on a search for the perfect orange coloured fabric (time to replace the chartreuse yellow cushion on my living room sofa – see post April 7th) I ended up in the Riverside district, located just east of downtown Toronto.  It was such a beautiful day and while looking up and admiring the bright blue sky I also happened to notice the great architecture that was around me.   At the corner of Queen and Saulter, is an outstanding example of some of the older architecture in Toronto.  Built in 1913 and designed by architect E.J. Lennox, (who also designed Toronto’s ’Old City Hall’) the building originally housed a post office, then a Town Hall and now it is home to the Queen/Saulter Library.  The building is truly ‘photo worthy’ and so I snapped away.  If I had not told you that this building was in Toronto you may have thought I had just returned from a vacation in Europe. 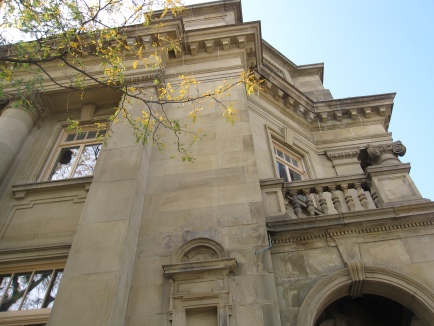 Across the street I spotted another ‘photo worthy’ example of older Toronto architecture.  At the corner of Queen and Boulton St is the Poulton Block.  This building was constructed in 1885 for William B. Poulton, a painter and a Mason, as a Masonic Orient Lodge.  The building was designed by Kennedy, Gaviller and Holland Architects in the Gothic Revival style.  From 1888 to 1910, Toronto’s first library east of the Don River was housed in rooms at the back of this building.  Once again I snapped a bunch of photos.  Through the wonders of technology I was able to view the photos asap and noticed that the shots of the Poulton Block made the building appear as if it existed as only one wall!  It was as if you looked right through the windows and out the back of the building but actually it was the reflection of the sky from the very tall windows.

I like these photos and am thinking about enlarging them to black and white or maybe sepia toned and framing them.  Actually a friend has been looking for some architecture prints for above her sofa so I may consider that too.